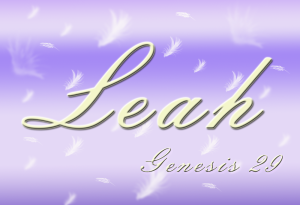 Who wants to read a story filled with betrayal, deception, jealousy, polygamy and extortion?  These look like characteristics that would come from a soap opera or a harlequin novel.  But no, this comes from the Bible.  The focus of this story will be about Leah in Genesis 29.

Leah was the first wife of Jacob.  She was also the oldest daughter of Laban (Jacob’s uncle) and the older sister to Rachel, Jacob’s second wife.  The name Leah means “wild cow” or “gazelle” in Hebrew.  The only physical characteristic we were given of her is she was tender eyed.

In an act of deception, Leah was given to Jacob by her father, Laban, rather than Rachel – who Jacob was promised to marry.  Did Leah have any choice in the matter?  Perhaps Leah was being obedient to her father or maybe she also loved Jacob.  In verse 26, Laban defended his deception because of the local custom: It is not so done in our place, to give the younger before the first-born.  This was not something Jacob was informed of in advance. Especially after living there for seven years, Jacob would have been familiar with this custom, if there really was such; thus it may have been just a lie on Laban’s part. Nevertheless, for Jacob it was irony, since the issue of the firstborn and birthright now entered in as it did with him and Esau.

We do know that Leah wanted her husband to love her, and she wanted children. While God didn’t change Jacob’s heart, God did love Leah. He gave her seven children, and in the process God taught her to seek comfort in Him. Regardless of the fact that Leah was not loved, she stayed devoted to him throughout their marriage.

Personal attractiveness is something Leah learned to live without. Leah mistakenly thought that she could win Jacob’s affection by presenting him with children (Genesis 29:34).  Leah kept looking for love, approval, and acceptance from Jacob, and she was constantly disappointed until she reoriented her life toward God.  Her character and her relationship with God did eventually develop. Leah learned to pour out her grief to God.

The names of Leah’s children expressed the conditions under which they were born. This was the ancient custom. They did not commonly give a child a name because the parents liked it. Naming children was a more serious matter. A name can inspire or intimidate a child.

In the naming of the first three sons, Leah hoped that Jacob would learn to love her or at least treat her equally. That never happened.

By the time Leah gave birth to her fourth son, her focus shifted towards God and away from Jacob, realizing that although she was not loved by Jacob, she was loved by God. This traces the messianic lineage – the world rejoices with Leah as her faithfulness was rewarded. “The Lion of the tribe of Judah,” Jesus the Messiah, came through her offspring Judah and the priesthood through her son Levi (see Rev. 5:5).  The two key institutions of Israel, priesthood (Levi) and royalty (Judah), came from an unplanned and unwanted marriage.

Leah was buried in Canaan with Abraham, Sarah, Isaac, and Rebekah. Maybe Jacob recognized her qualities in the end because at the end of his life he asked that his own bones be returned to Canaan, where he lay not beside his beloved Rachel, but the long unloved Leah.

* Leah’s life reminds us of a number of things:

Although it isn’t easy, I hope this is encourages to you to trust God with all your heart, mind and soul for what He’s doing in your life.

Your sister in Yeshua

4 thoughts on “Leah, the Unloved – An example for us today”

The Bible you've been missing