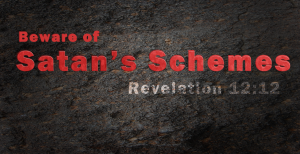 Halloween is always a tough time for Christians, especially for those with children. It is also a dangerous time for some who get involved with what may seem to be “harmless” events associated with Halloween – but they can also be “entry ways” for the occult and can prove very badly for those naive and gullible.

We need to remember, though, that there are two distinct kingdoms of the universe.

One is the Kingdom of God that is ruled and governed by God.  This is the kingdom of light, where righteousness rules and the result is having eternal life.

The other is the kingdom of the enemy that is ruled and governed by Satan.  This is a kingdom of darkness, where evil rules and the result is death.

Both kingdoms are ACTIVELY pursuing you for citizenship.

When Satan rebelled, he took 1/3 of the angels with him.  They were cast to the earth – kicked out of heaven.  They lost the battle.  Those spirit beings, those angels who fell and were then cast out of heaven are now known today at demons.   When Satan fell and was expelled from heaven – he was kicked to the earth.

Satan knows he has a short amount of time before Jesus’ return.  Until then, Satan’s goal is to bring as many people down with him as possible.

Revelation 12:12 – “Therefore rejoice, O heavens, and you who dwell in them! Woe to the inhabitants of the earth and the sea! For the devil has come down to you, having great wrath, because he knows that he has a short time.”

There are only two sources of spiritual power; there is God and there is Satan.  There is nothing in between.

Where do you think Judas got the idea to betray Jesus? John said that the Devil put the suggestion into his heart (John 13:2).  The mind is a target for satanic attack.

Satan is all about divination.  Read 2 Chronicles 33:6 about the king who practiced sorcery, divination and provoked God to anger.  Verb form of the Hebrew word, “nachash”, is one who practices divination, sorcery, witchcraft – involved in demonic principality and powers.

Satan distorts the Word of God to deceive the people of God to disobey the will of God.

In Genesis 3, Satan appears as a serpent – a talking serpent.  He’s stunning and beautiful in appearance.

In Genesis 3:1 – his body is described as very glistening, very slick.  The serpent was more crafty than any of the wild animals that the Lord created.  Cunning and deceptive – there is something very sleek, very sneaky, subtle, and secretive about the seduction of Satan.  He’s beautiful, he’s charming and he’s doing everything he can to infiltrate culture, the hearts and minds of people.  It is packaged and marketed as magnificently now as in the days of the garden with Eve.   This is the way he is now – he’s subtle and seductive that goes unnoticed by people today including those in the church.

Are your eyes open to the darkness of today and deception that surrounds us?

The media is Satan’s playground.  Media has taken satanic, evil, demonic themes and ideology and mainstreamed them into our culture.

In 2 Corinthians 2:11, Paul says that we should not be unaware of Satan’s schemes.   Remember, Satan is going to come in subtly, cunningly, seductively – packaged and brilliantly marketed.  We have to have eyes of discernment to recognize these things.  We have to have ears that can hear it.  We have to have hearts to recognize the different ways that Satan is making inroads in our culture and into our hearts.   There has become a normalization and a glamorization of things related to satanic and demonic themes.

Do you recognize how Hollywood has glamorized sorcery, witchcraft, divination, spells, demonic and death themes?

An example of what Hollywood has brought us is the movie Avatar.  The philosophy behind this movie has been around for thousands of years.  The basis behind the theme, according to James Cameron, is about Hinduism and Pantheism.

Have you ever taken a yoga class and the teacher concludes the session with the word, “Namaste”?  This word means “the God in me sees the God in you.”  In other words, “I see Myself, in your eyes.”

For the pantheist, the final reality in the universe is spiritual and man is his own savior because their belief is God is all and all is God.  The prefix “pan” in pantheism means, “all” and it refers to the idea that all that exists is God.  The deity of man is a lie that will be widely believed at the end of the time.

Remember, Satan is subtle and seductive that goes unnoticed by people.

Did you know that the number one recommended book on the Barnes and Noble website for teens is called, “Silence”?  This is a paranormal romance, which is one of the biggest selling sub-genres today!  This book is about a girl who finds her life in danger when she becomes involved with a mysterious new student at her school named Patch, who is revealed to be a fallen angel.  Patch is the typical “Twilight era” young adult hero.  This book has become a New York Times bestseller.

Indeed, Satan is subtle and seductive!

The Twilight Series – we need to understand the origination of this series.

The author, Stephanie Meyer, is a Mormon.  First, Mormonism was started by a man named Joseph Smith who said he received a vision from an angel named Moroni.  This angel appeared to him and said that Christians didn’t have the full revelation of God and that we needed to have more revelation and so Joseph was given more revelation.

If Moroni was an angel, then it was a fallen angel.

The movie Twilight originated from a dark dream that Stephanie Meyer had.  As indicated on the author’s website (http://www.stepheniemeyer.com/twilight.html), she said, “I woke up (on that June 2nd) from a very vivid dream. In my dream, two people were having an intense conversation in a meadow in the woods. One of these people was just your average girl. The other person was fantastically beautiful, sparkly, and a vampire. They were discussing the difficulties inherent in the facts that A) they were falling in love with each other while B) the vampire was particularly attracted to the scent of her blood, and was having a difficult time restraining himself from killing her immediately. For what is essentially a transcript of my dream…”

Hmmmmm, this is very familiar to Genesis 3

What I hate is when the enemy subtly seduces people with his ideology and doctrine.  This is evil stuff.  Ephesians 5:8-11 – live as children of the light…. Ep 5:11

You need to pray about this and make a choice.  We need to be aware to protect our kids and our families and friends.  Philippians 4:8 – don’t be vulnerable.

Let’s humble ourselves and pray for discernment in this dark and fallen world.

5 thoughts on “Satan is Subtle and Seductive”

The Bible you've been missing